For my reminiscenses on how I “got the bug” for classical music, check out my earlier blog “Discovering Classical Music” and my bio. But as an overview and focus on my “first time”: my parents were both musicians and music teachers, so I was exposed to music since before I can remember.

My earliest experiences were singing hymns in church, and eventually anthems in the children’s choir, conducted by my mother (we even did three part harmony!). One Sunday after church service I told my parents, “I loved the music today.” They thought I was talking about my step father’s organ solos or the adult choir’s singing, but I was actually referring to a congressionally sung hymn entitled, “Are Ye Able Said the Master” ( We were Methodists, and if you ever saw the movie “Friendly Persuasion”, you know that Methodists are notorious for loud congressional singing). Here’s a contemporary choir’s somewhat sedate rendition in case you’re curious:

Hearing it now, I wonder what enthralled me so. Certainly it is a solid Protestant hymn, but there are dozens that are rightfully better known; “Rock of Ages”, “All Hail the Power of Jesus’ Name”, “Abide With Me”, “Blessed Assurance” to name a few. Perhaps it was the very obscurity of the hymn that made it such a revelation to my seven-year old ears. But by far the most memorable listening experience even approaching classical music in my formative years was my parents giving me the soundtrack  from the 1959 film “Ben-Hur”. We even made a special trip to Wilmington, Delaware from our home in Chestertown, Maryland to see the film on the big screen during one of its first roadshow presentations, and I was transfixed. Soon I had a toy “Ben-Hur” chariot race game, the Classics Illustrated “Ben-Hur” comic book, and I was making “Ben-Hur” drawings for my third grade art lessons. (A girl in my class even commented, “Another dumb “Ben-Hur” picture!”) But nothing could compare to my exaltation at hearing the glorious music on my phonograph over and over again. I immediately declared Miklos Rozsa to be my favorite composer, and would go on to own Rozsa’s soundtracks to “King of Kings” and “El Cid”.

Truth be told, by the time “Ben-Hur” made its way to the tiny Church Hill Theater near Chestertown over a year later, I was sick of it. (Before 1977, when studios struck more prints, it would take a couple of years before a new film was screened in every town.) Of course, the dinky Church Hill screen was not nearly as large as the one at the palatial theater in Wilmington, Delaware, plus seeing the film at night after a long day, instead of at the earlier matinee showing in Wilmington, probably made me painfully aware of its great length. And, of course, I was a year older and less impressionable.

Nonetheless, Rozsa’s music still stirs me. A couple of my Friday night request show regulars prevent me from ever forgetting it. And I’ve even made my peace with the movie, dated special effects and poky Victorian plot development notwithstanding. I just watched “Ben-Hur” this past Christmas on Turner Classic Movies and teared up right on schedule. Even the tiny Church Hill Theater has been long rehabbed into a community arts center, and I am now of an age where I can appreciate its charming Art Deco design.

These days, however, my favorite Miklos Rozsa score is for the eye popping 1940 technicolor fantasy “The Thief of Bagdad”, one of my favorite movies of all time. If you listen closely, you can hear just about every idea Rozsa had for “Ben-Hur”  fully realized nineteen years earlier. 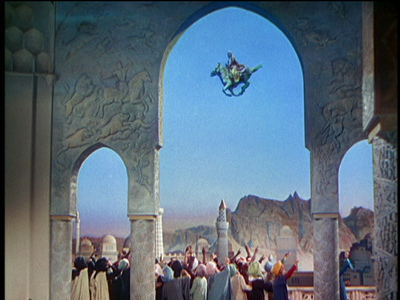 5 Responses to My First Time …